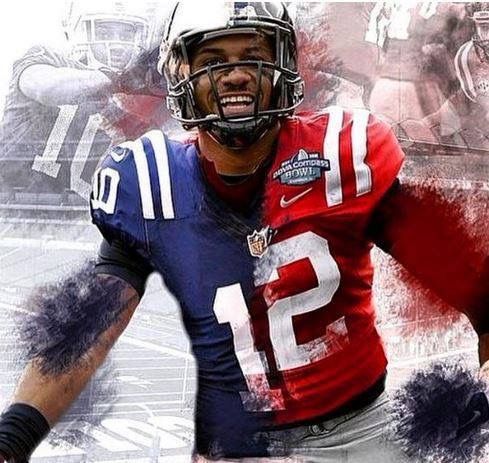 The NFL free agent market is in full swing and players are in the process of signing large deals. We’ve already seen many professional athletes such as Bryce Harper sign mega contracts in recent weeks and, the trend should continue.

Donte Moncrief is a wide receiver in the NFL. A former college star at Ole Miss, the veteran wideout his currently waiting for a deal he could sign for the years to come. Donte Moncrief’s net worth currently sits at $4 million.

Through his first five years in the NFL, Moncrief has compiled a solid list of statistics. He has caught 200 career receptions for over 2,500 yards and a total of 20 touchdowns.

Although some have commented that Donte hasn’t lived up to his potential, he’s been on the unfortunate end to a quarterback situation. He played in Indy while Andrew Luck was hurt, and last year didn’t have much luck with Blake Bortles throwing to him. He has also dealt with a few nagging injuries.

Donte’s best season in the NFL came his second year in the league. He played in all 16 games for the Colts that season. He recorded career bests in receptions and yards in a season during that year. He caught 64 balls for 733 yards to go along with 6 touchdowns on the year.

Donte Moncrief is about to enter his sixth season in the NFL. The five year NFL veteran is currently a free agent and waiting to see where he will play for the 2019 season and beyond. Through his first five seasons in the league, Moncrief has earned just north of $13 million in career earnings.

Moncrief was the 90th overall pick in the 2014 NFL draft by the Indianapolis Colts. Upon being drafted, Donte signed a four year deal valued at $2.8 million. His first contract came with an initial signing bonus of $540,000 to help jump-start Donte Moncrief’s net worth.

For the 2018 season, Moncrief signed a one year deal with the Jaguars. He hoped to use it as leverage for securing a bigger deal down the road, which is where he is now. With the NFL free agent market still in the works for many players, Moncrief will have to be patient to see which offers come his way.