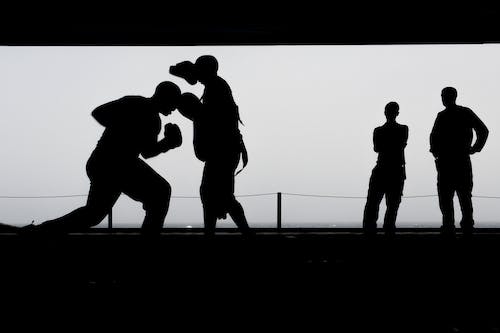 Floyd Mayweather was born on February 24, 1977, in Grand Rapids, Michigan. Mayweather gained a lot of his skills from his father, Floyd Sr., a welterweight contender and his uncle, Jeff Mayweather who was a featherweight champion.

Floyd Sr. introduced Floyd to his first boxing gloves at the age of 7. With his local gym just five doors from his home, Floyd was able to put in hours to turn a passion into a dream and a dream into a reality.

Before he became a professional boxer, he had already earned himself three national Golden Gloves and an Olympic bronze medal. This wasn’t enough for Money Mayweather. He went on to rock the world with 50 wins and 27 wins by KO against a slew of different boxers.

Floyd’s defensive excellence in the boxing ring earned him an “offensive” amount of money. He had an income of $300 million from 2014-2015, breaking Tiger Wood’s record for money made by an athlete in a single year.

GoBankingRates estimates that Floyd Mayweather, Jr. is one of only three athletes in his career to make over $1 billion. The estimated $275 million he won in August 2017 from his battle with Conor McGregor gave him a big boost into the elite club.

There is no questioning his potential during his fighting career to rack up money. Forbes crowned him the world’s highest-paid celebrity , receiving $300 million from June 2014 to June 2015.

In one night, Floyd was able to exceed the combined $259 million earnings which Christiano Ronaldo, LeBron James, and Lionel Messi made over seasons. His fight with Conor McGregor earned him $275 million. His 2017 unification fight with UFC star Conor McGregor won him a payout well above his $100 million guarantee (and that doesn’t include the $25 million he picked up on his trunks, gowns, hats and other accessories for sponsorships). He earned around $66,000 a second in the ring in 2015, according to one report.

Floyd’s fifteen fights, starting with Oscar De La Hoya in 2007, earned $1.7 billion in pay-per-view revenue from almost 23 million customers. Money May’s promotion company, Mayweather Promotions was able to earn itself a sizeable chunk of the pie, thanks to a decision in 2006 to get rid of his contract with promoter Top Rank. $750,000 was a small fee compared to the earnings to come in future years.

Mayweather, who continues to break his own records for most of the money a fighter receives, pulled $41.5 million in a ludicrous bag. On the other side, Alvarez had to accept a “measurable” $12 million.Mayweather’s fight against Manny Pacquiao generated over 4.4 million U.S. buys and over $400 million in domestic pay-per-view revenue alone. Live gate receipts earned $71 million in revenue.

Floyd earns $10 million from annual endorsements. However, Investopedia explains that this figure is sometimes much higher. Mayweather, for example, earned an estimated $105 million from June 2013 to June 2014 for endorsing various products.

What’s it like to have a $25 million mansion with a candy shop and 225-bottle wine rack? You’ll have to ask Floyd who also shelled out $4.7 million for a 1,018 horsepower car, the Koenigsegg CCXR Trevita. The boxing legend wore his $2 million watch and cruised around Los Angeles with a fleet of four high-priced vehicles, including the Koenigsegg CCXR Trevita, which he claims cost him about $5 million.The beast on wheels would look perfect on his $10 million Las Vegas home, complete with a fountain the size of a swimming pool and 11 bedrooms. Mayweather also runs Girl Collection, a men’s club in Las Vegas, “The Money.”

From the classic $3.2 million Ferrari Enzo to the Ferrari 458 Spider, his car collection is a sight to behold. Floyd Mayweather collected over $15 million worth of cars. He admitted he doesn’t drive all of them.

See how to write an sports essay on Howtowrite.Customwritings.com

You never know where the road may take you. It could be to 27 knockouts over 300 rounds of boxing. It could be on top of the world or like Mayweather.