The last few years have been hard for football fans. Stadium restrictions due to Covid-19 prevented many people from attending games. However, now that things are started to get back to normal, fans are excited to see live games again. Unfortunately, the ticket prices also seem to reflect this attitude and have caused some teams’ tickets to rise. But, it is still possible to see your team play without spending a fortune. If you are hoping to catch a game this year, here’s how you can score the cheapest NFL tickets around.

Which Teams Have the Cheapest NFL Tickets?

Featured below, you will find charts compiled by the analysts at Finance Buzz to determine the cheapest teams to watch at home and on the road last season. They gathered data from more than 1.6 million NFL tickets sold through secondary markets to determine these figures. Based on their findings, the average league price for a ticket during the 2021 season was $203.14. However, many games had tickets for a fraction of the price.

Many teams with poor performance or unrest within the organization have trouble selling tickets at home. So, you can often find tickets for much less than their face value. But, there were only two teams in the NFL with average ticket prices under $100. The cheapest tickets belong to the Houston Texans who are rebuilding, and the Jacksonville Jaguars who are coming off a controversial and disappointing season with coach Urban Meyer. You can see the Houston Texans for $82.25 a ticket and the Jacksonville Jaguars for $95.38 per ticket.

On the other hand, there are a few teams on their list that you wouldn’t expect to see. The Buffalo Bills were 11-6 on the season while the Cincinnati Bengals with a record of 10-7 went on to become AFC champions. This may be more a result of the quality of teams they played at home and prolonged losing steaks mid-season.

However, one thing is clear: even die-hard fans don’t want to spend money to watch their teams lose. 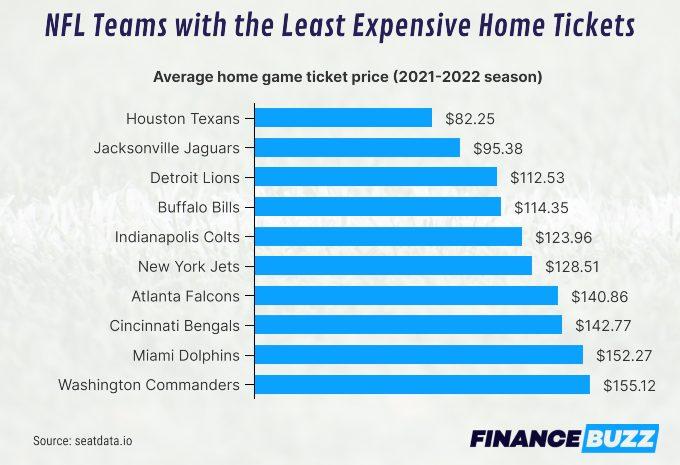 The Cheapest Tickets on the Road

It should come as no surprise that you see many of the same teams on the list for the cheapest NFL tickets on the road. The Texans remain one of the least desirable teams to watch, with average ticket prices of $120.22. But, the New York Jets are the least popular opponents fans want to see, with the lowest average ticket price of $118.84.

If you scroll down the list, there are a few more unexpected teams here as well. The Minnesota Vikings have one of the most loyal fan bases, yet some of the cheapest NFL tickets. The Tennessee Titans had a great season (12-5) and the LA Rams went on to win the Super Bowl. While ticket prices have fluctuated some this season, it goes to show that a team’s performance isn’t the only factor tied to ticket prices. 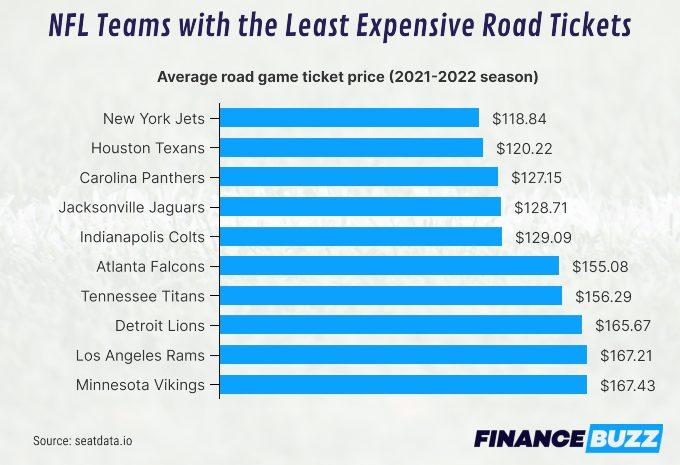 Where Can You Find the Best Discounts?

So, where do you go if you want to find the best discounts? While Ticketmaster is the official partner with the NFL, they are notorious for their fees. But, at least their prices stay consistent.

Using the site has its benefits as well. Not only is the site secure, but it also has ticket protection plans and no limits on the number you can purchase. Furthermore, you can often find tickets for resale at lower prices.

But for those who prefer to shop around, here’s a list of the 5 best places to find discount tickets with secure payment methods.

5 Sites with the Cheapest NFL Tickets

StubHub is a popular online site to help you find the cheapest NFL tickets. It is very user-friendly with a simple menu and easy-to-use filters to find the tickets you want. And, it comes with a seat-view option where you can see your view of the field and know exactly what you’re paying for.

SeatGeek is another well-known retailer that offers strong competition for Ticketmaster prices. The site also has seat-view and seat-rating features to help you find the perfect spot. One thing that sets it apart is that it shows you all seat prices with the fees included. So, you know exactly how much the total cost will be before checkout. And, you will know if you are getting the lowest price available before you book.

CheapTickets is another secure site to purchase your NFL tickets. Its prices are on par with the other sites, but they offer a 150% money-back guarantee if the seller doesn’t send the tickets in time, if at all. And, they also give a 100% refund if they reschedule or cancel the game.

Vivid Seats is a great option for last-minute deals. While the initial prices may be higher, they become much better if you are looking closer to game day. You won’t find cheaper same-day tickets anywhere else. And, they offer a seat-view option as well as ticket protection plans.

These days, you can find just about anything on this auction site, including tickets. If you see some that you want, you may want to take your chances to bid on them. You could wind up getting them for a steal. Although it is less likely to get discounts on popular games, you could luck out when your team is playing a “lesser” opponent.

Before you spend hundreds of dollars on your NFL tickets this season, here are a few tips to make sure you get the best deals.

Where do you get your NFL tickets? Share your ideas in the comments below!