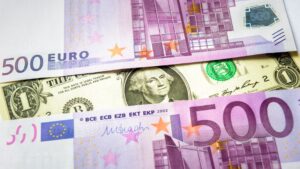 For the first time in twenty years, the euro and U.S. dollar have an equal exchange rate. The last time they reached parity was December 2002 when the currency was first introduced. Since then, it has been consistently stronger than the U.S. dollar. At least, until now. On July 13th, the euro and dollar reached parity. But what does this mean? Is it a result of fluctuations in the global economy? Or, it is a sign that the currency which was once intended as a symbol of unity is now tracking Europe’s economic downturn?

What’s Going On with the Euro and the U.S. Dollar?

The War in Ukraine

Since February, the war in Ukraine has sent shock waves through the global economy. Supply chains have been disrupted and the prices of imports continue to rise. Furthermore, inflation is skyrocketing and everyone is concerned over increased energy costs. It could become even more dire if import-dependent countries are entirely cut off from Russian oil, natural gas, wheat, and other staple commodities, especially with winter just around the corner.

As the violence persists, the impact continues to devastate Europe and threaten the euro’s stability. This year alone, its value has sharply declined by 11%. Although banks are raising interest rates to counteract inflation and stabilize the euro, financial and economic experts fear it is too little, too late. Some say that parity with the U.S. dollar hints that global trade is simply slowing down. However, some analysts fear that the euro will likely continue to depreciate and that a recession is looming in Europe.

Searching for a Safe Haven

From the outset, the U.S. government has taken an offensive strategy and aggressively increased interest rates to bolster the value of the dollar. Not only has this helped to counteract the effects of inflation, but it has caused the value of the U.S. dollar to increase by 10% since the start of the year.

Although the entire world is feeling the effects of the conflict, the U.S. has remained relatively insulated from the worst of it. This fact has drawn attention to U.S. companies and caused some foreign investors to view the U.S. as a safe haven in a volatile market. The parity between the euro and the U.S. dollar has made it more attractive to international investors, further affecting the value of the euro.

USD remains the dominant reserve currency and shows more stability through market fluctuations. However, no one can predict how long these conditions will last. And, will the situation stabilize? Or, are things going to get much, much worse for the euro?

What Does This Mean for the Global Economy?

No one can say for certain what the long-term repercussions will be. However, there are a few immediate ways that parity between the euro and the U.S. dollar will impact the global economy.

1. It will cost more to do business in Europe.

Unfortunately, the depreciation of the euro will make it more expensive to do business in Europe. Companies that rely on materials from Europe will have to pay higher production costs. Furthermore, European consumers will no longer be able to purchase as much as they have in the past.

2. It will be cheaper to buy exported European goods.

Those who are trading in U.S. dollars now have more buying power, making it cheaper to buy European exports. Not only does this ease the effects of inflation for buyers in the U.S., but it’s also good for European exporters whose products are now more competitive with domestic brands.

While a volatile market is terrifying to most investors, it also creates new opportunities. When stock market prices are down, it presents a good opportunity to buy on the dip. If you make the right moves or choose the right stocks, it could reward you handsomely when the markets rebound.

In the past, I’ve always avoided traveling to Europe because I knew my money would go further in other countries. However, that has changed now that there is a 1:1 exchange rate between the euro and the U.S. dollar. American travelers win big with the currency exchange since they now need fewer dollars to buy euros.

This has made it much more affordable for travelers to visit Europe with reduced airfare. However, the increased purchasing power is where you can use the parity between currencies to your benefit. Luxury and import items have become much cheaper and offer huge shopping discounts. And, you no longer have to worry about converting the exchange rate in your head since they are now equal.

The Significance of the Psychological Barrier

While this may not seem like a big deal, the euro and U.S. dollar reaching parity has much deeper implications for the entire world.

Although the two currencies have been close at various points, this is the first time in two decades that the U.S. dollar has surpassed the euro. There is a good probability that the market will stabilize in time, but it signifies the threshold of an important psychological barrier. The euro has been a stabilizing force in the global economy for a long time, and now its position has come into question.

The steady decline of the euro also accentuates the underlying concerns of the countries across the EU. It signifies that their currency is getting weaker and their economic prospects may be fading. While the banks and national leaders are taking steps to counteract inflation and bolster the value of their currency, it may not be enough.

Many Europeans are feeling a greater sense of dread as inflation increases and questions arise over possible rationing through the winter. Unfortunately, the farther the euro drops, the longer these conditions will persist. It greatly reduces the chances of a quick rebound and seems to make the prediction of a European recession more of an inevitability.